Photoshopping, Processing, Compositing– Is There a Difference? Part Two: Compositing 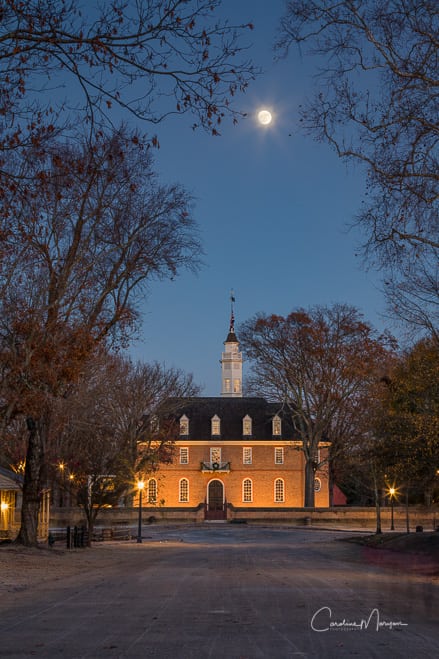 Photo of the Capitol building in Colonial Williamburg, Virginia at dusk. The Cold Moon Super Moon is in the sky above. This is a composite of two photos taken together, with different shutter speeds, to show the details of the moon. Click on the photo to see it larger.

In the first post in this series, I wrote about photoshopping, and it’s emphasis on deception.

Compositing also attempts to distort reality by layering two or more photos to include elements in the final image that weren’t originally there or to remove elements that were there. Some common examples of this are replacing a dull grey sky with a more colorful one or placing the subject on a more interesting background. Compositing can also be used to expand the dynamic range of a photo, where movement within the photo wouldn’t allow an HDR to be created. I use this when trying to capture a full moon with foreground interest.

Designers frequently create composites for advertising. An example would be a photo of a smiling couple, shot in a studio, but now placed in front of a new house for sale. The advertisement makes no claim that these exact people were there and had just bought the house. Instead, you are meant to see yourself in their place, smiling as you buy the house.

Most newborn photography involves editing of this sort. Several similar photos are taken of the baby with a parent’s hands holding it, but in different parts of the baby’s body. Then, the photos are combined in Photoshop and the hands are removed, to reveal a sweet photo of a baby lying peacefully in a nest of fluffy blankets with no adults around.

Movie posters are often created from a combination of scenes from the movie, artfully superimposed on top of one another.

Compositing is often used for comic purposes. Late night comedians use composites of the faces of famous personalities superimposed on different bodies or in unexpected places for a laugh. These are usually done in an obvious manner. The humor comes from knowing it’s a composite.

A very common use of compositing is replacing heads in group photos. Most event photographers will take a series of shots of a group of people posing, assuming that at least one person will have their eyes closed or will have turned their head. Then, the photographer layers a group of the shots and erases the face of the blinking person to reveal them on the lower layer, with eyes wide open.

Have you ever seen a photo of a lunar eclipse, with several different phases of the eclipse, all in the same photo? That’s a composite.

So why is this OK when photoshopping is considered cheating? There is an element of art involved in it, and it is understood to be a composite by the audience. There is no attempt to represent the final product as a photo shot straight-out-of-camera. The designers are often called artistic designers or directors, to make this clear.

Many photography hobbyists enjoy the challenge of creating composites. If you think you might be one of them, check out Matt K’s Online Compositing Course: http://mattk.com/compositing/

If you’d like to read more about shooting full moons, check out my blog post, Shooting the Full Moon.

In the next blog post in this series, I’ll talk about processing. Photographers may very well use Photoshop to process, but it’s not photoshopping, and it’s not compositing. In fact, you’ll learn that all photos created on digital cameras are processed, one way or another.