June 3, 2016 In Improve Your Photography 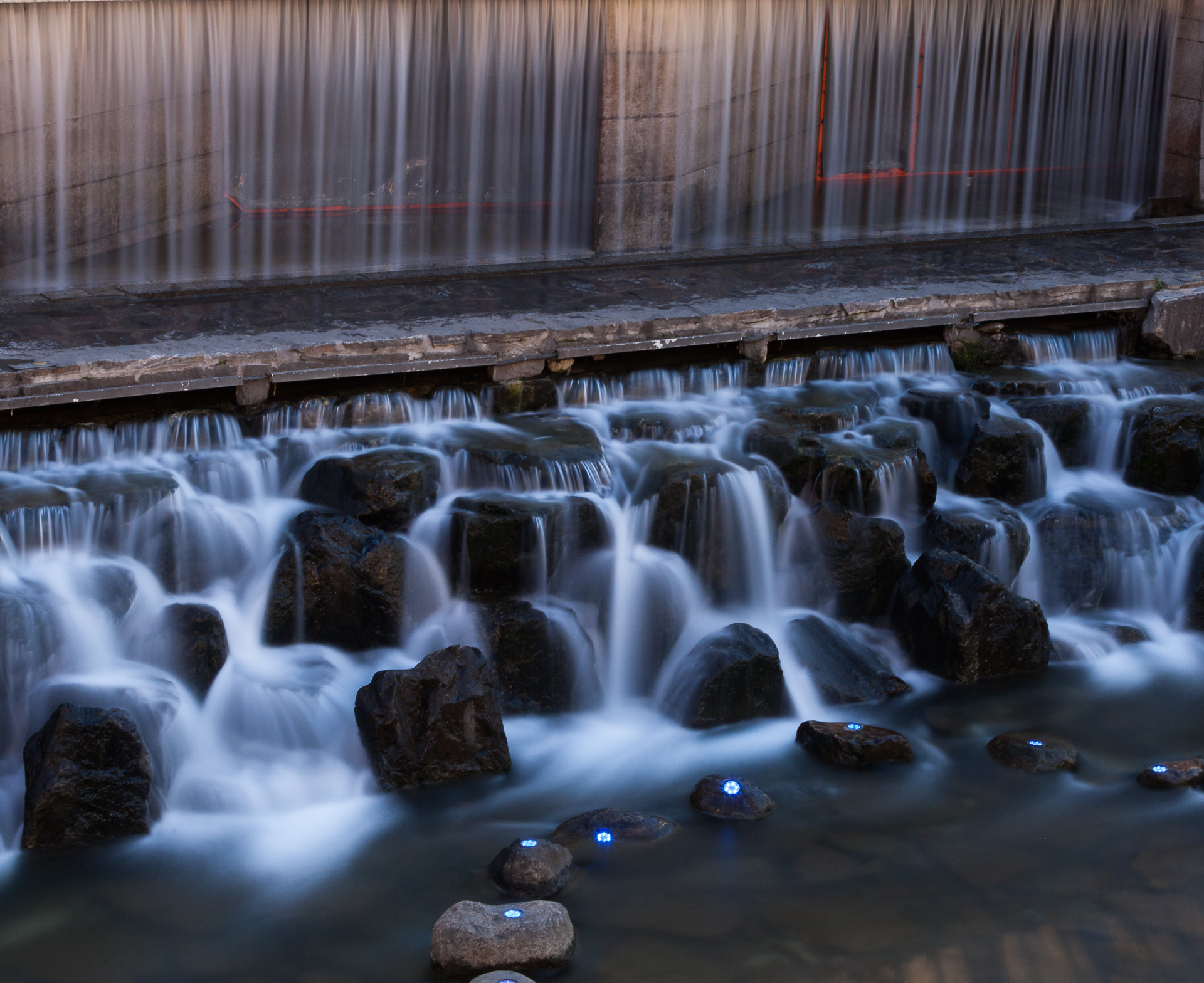 A long exposure shot of a waterfall along the Cheonggye Stream, in Seoul, South Korea. Were there people in this shot? Who knows? f/22, ISO 400, 30 sec. (Click on photo to see a larger version.)

I love to travel! And I really love to shoot travel photography!

However, have you ever noticed how hard it is to arrive at a site at the perfect time for photography? It seems like either the light is wrong or the venue is crawling with tourists or both!

In my blog post about creative inspiration, I promised to share a secret or two for making tourists disappear. 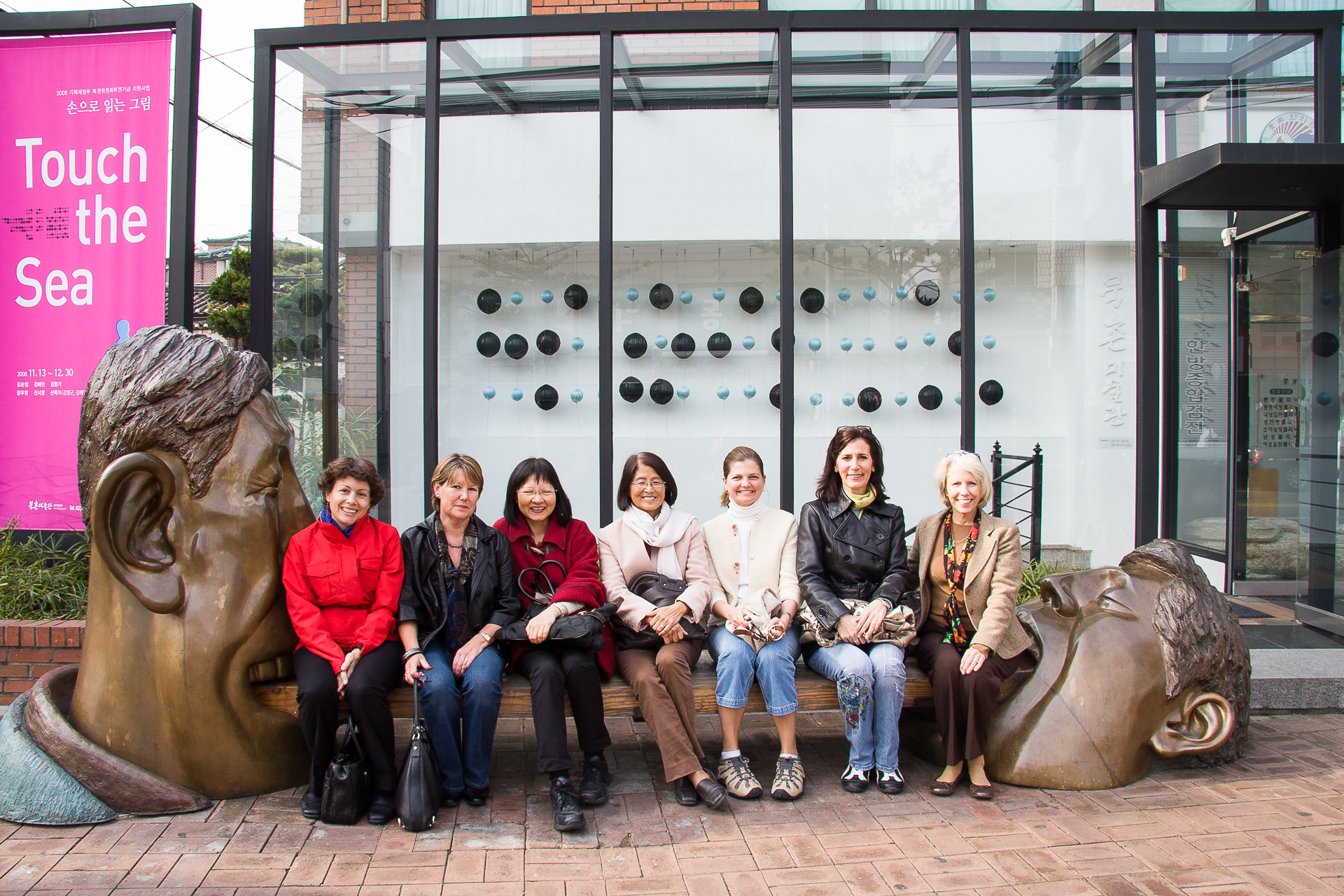 Now, it’s true that you may want to include photos of your friends on the trip. A photo book of the trip would feel pretty sad without shots of the people. And sometimes, the irony is worth the photo, like the fun shot we took of our group on a walk around the Bukchon Hanok Village in Seoul, South Korea. Some sculpture just begs to be sat upon, especially when it’s designed to be a bench! 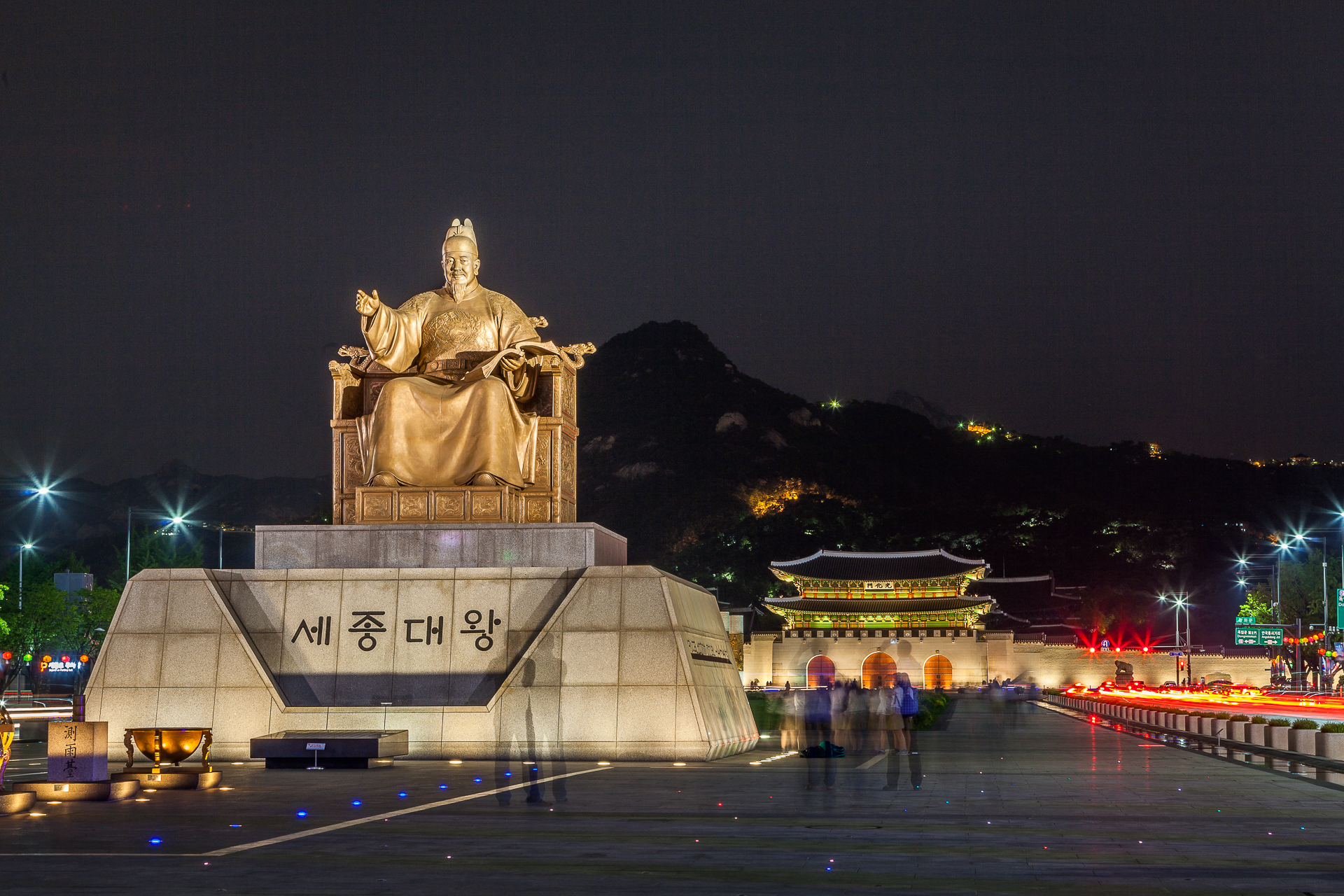 A 25-second exposure of the statue of King Sejong in Seoul, South Korea. In the background, Gwanghwamun Gate can be seen. In the foreground, people appear as shadows, due to the long exposure time. If they had moved, they would have completely disappeared. (Click on photo to see a larger version.)

Sometimes, people lend a sense of proportion. It would be hard to judge the size of this statue, without the ghosty people in the image. But, the photo is about the statue and the gate in the distance, not the people.

So, I used one of the best secrets to making people disappear: a long time exposure. In this case, twenty-five seconds. Since this is a very popular place, many tourists walked through the scene. Most disappeared completely. Some of them, however, were busy taking pictures, just like me! So, they were standing pretty still and ended up appearing faintly in the photo. They were definitely not the subject of the photo, but they added to it in a subtle way. 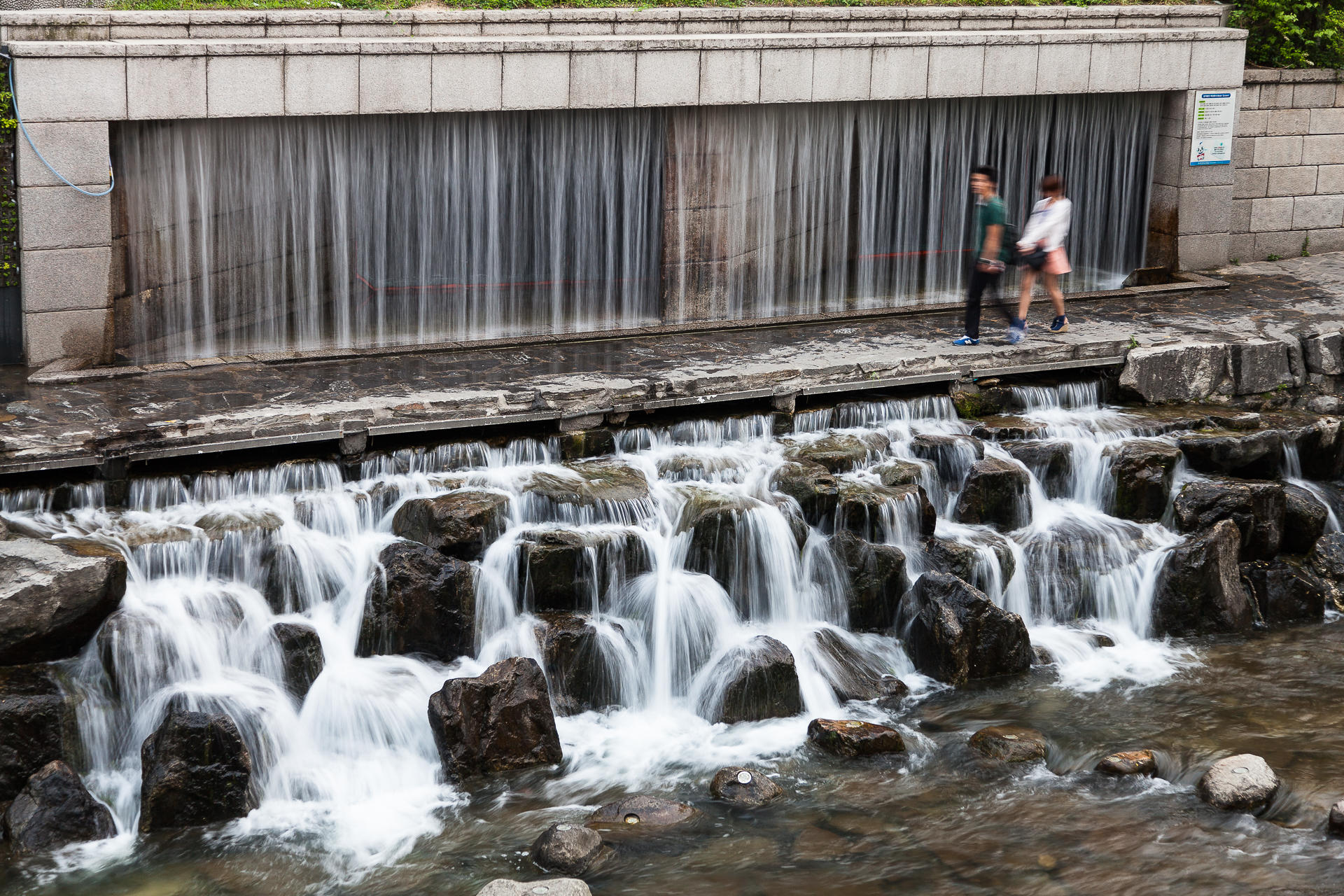 A couple walks past a waterfall along the Cheonggye Stream in Seoul, South Korea. They are slightly blurred because of the slow exposure. f/4, ISO 100, 1/6 sec. (Click on photo to see a larger version.)

Meanwhile, back to the first photo… I asked a question in the caption and here’s the answer. Yes, there were people in that photo!

To illustrate this, I went back to the same place, a few days later, while leading a photo walk. This time, I took the shot with a 1/6 second exposure.

Three couples walked through the scene. Two were walking quickly and disappeared but one was strolling through the scene and was recorded. You can see them, but if you click on the photo, you’ll see the motion blur due to the slow shutter speed. The water also has a slightly milky look. 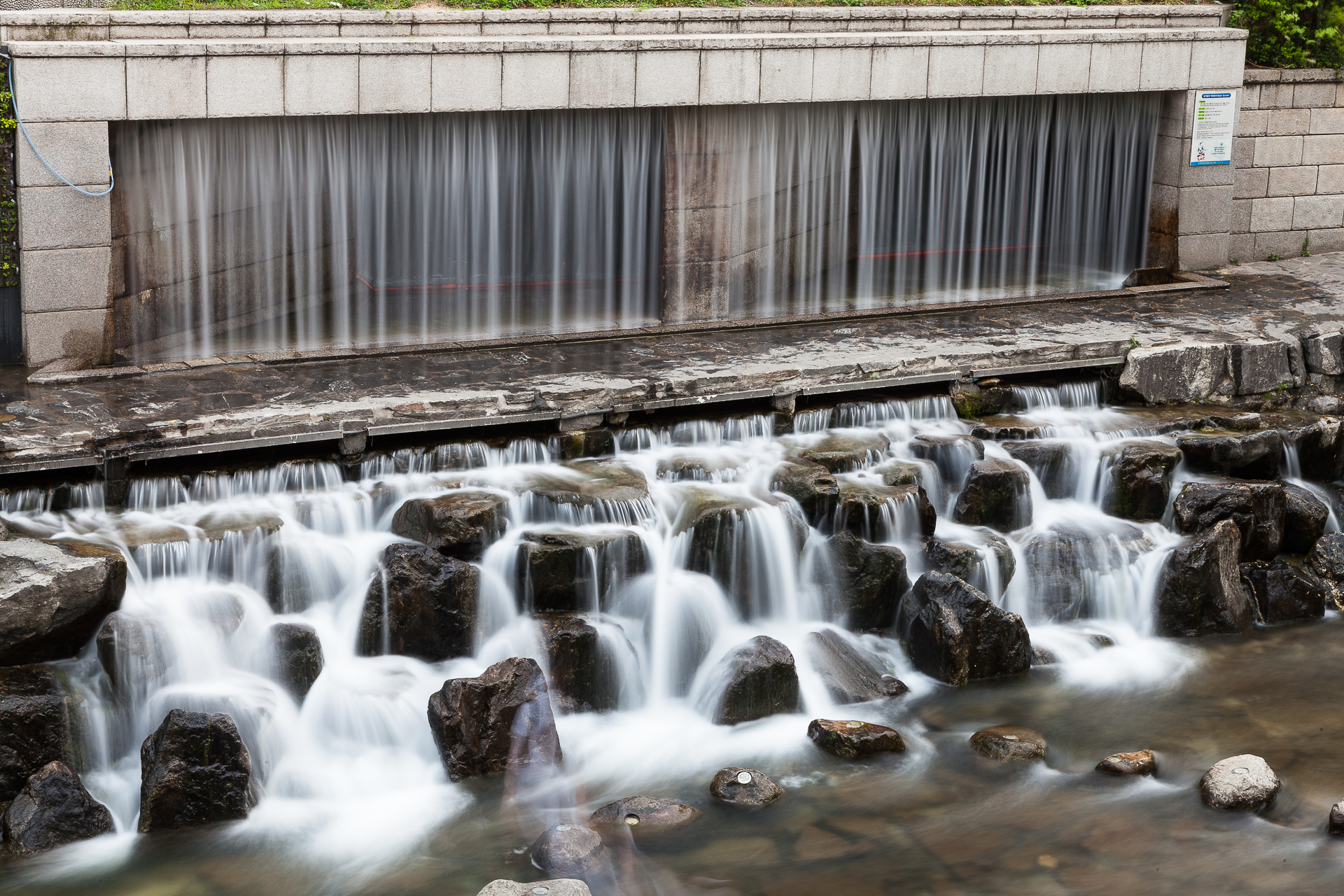 A long exposure of a waterfall along the Cheonggye Stream in Seoul, South Korea. Many people walked through the photo but disappeared due to the long exposure. f/22, ISO 100, 5 sec. (Click on photo to see a larger version.)

Then, I took the shot again, with a much slower shutter speed of five seconds. During that time, several couples strolled through the scene. Since they kept moving and they were moving across the scene and not towards me, they didn’t get recorded! (Of course, I still think the very top photo was better since it was taken later in the afternoon and the lights were on in the stream…)

To shoot at that slow shutter speed in the bright afternoon light, I had to use two neutral density filters layered together. If you do use strong ND filters, you will need to focus and turn off the auto-focus before you put them on. Your camera won’t be able to focus through the filters.

So, how do you know how to set your camera? First of all, you’ll need to be able to set the shutter speed. And, you’ll need a tripod. If you’re taking the photo in broad daylight or using an extremely slow shutter speed, you’ll also need a neutral density filter or two.

1) Set your camera to Shutter mode. This is often a letter S on your mode dial. On a Canon, it will be Tv (for Time Value!).

3) Your camera will set the Aperture, so you don’t need to worry about that.

5) Place your camera on the tripod. (Here’s an extra hint. Turn off the image stabilization when you do this.)

6) Take a picture and look at the results on the LCD screen. The faster the people are moving, the easier it is to make them disappear. It also helps if they are moving across the scene. If they are still visible, set a slower shutter speed.

8) As you can probably guess, this trick requires low light or your photo will be very overexposed. But, there is a solution… add a neutral density filter to your lens. They come in various strengths and you may need to layer several. The filter will decrease the amount of light that reaches your sensor. You can find an example at Amazon.com by clicking here. (affiliate link)

Have you tried long exposure photography? Do you have a favorite setting?